It's been a long time coming

My dear one has pointed out that it has been a long time since I blogged and I guess it is true since the last one showed a lot of snow on the ground and now we have a lot of weeds in our grass. He is proud of the weeds because it shows that we don't use pesticide and we have a lot of variety in our lives. I don't think that variety in your weeds proves that you are exciting, it just means you don't know how to weed or are too lazy to do it.
It is hard to know where to start - a lot has happened and yet nothing has. So lets not start at the very beginning but continue as if I have never missed a week.
July 1 is our moving day. It is estimated that 290,000 homes move in Montreal alone, on this day. It is a tradition from about 300 years ago. The law was passed so farming 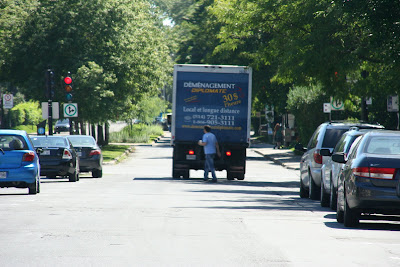 tenants wouldn't be forced from their homes in the dead of winter and this evolved into moving day being May 1st. Later it was mandated to July 1 so that students wouldn't be have to transfer to a new school in the middle of the school year and so no one can enjoy Canada day. It is a legal holiday so movers charge a lot and you can't even get one unless you book way, way in advance. A lot of animals are abandoned - that part is really shameful. 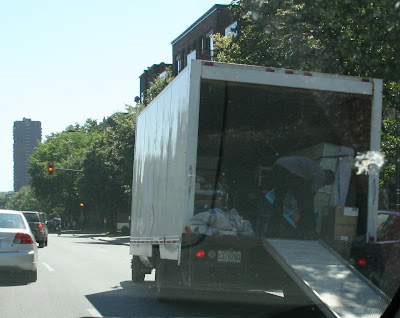 These pictures were taken while I was driving or actually while the car was driving - I was the passenger. That is real bird poop on the car windows. That's just disgusting.

Today was really hot and instead of going to a beach or relaxing in the before mentioned weed infested back yard, we decided to go to the gay village and see the art show there. The street is blocked off to cars and artists show their stuff. I think I am going 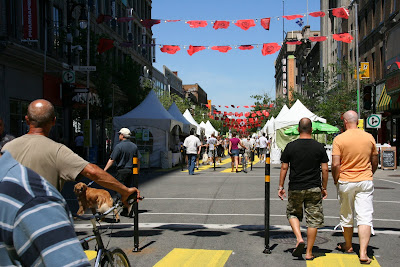 to try to enter next year. It can be a crap shoot. Today was almost too hot and it could rain so you waste your money renting a tent, but you never know. We spoke to one artist and she said it was worth it. This artist came from Toronto so she had more expenses like eating out. The village has a lot of great restaurants - it is easy to to spend a lot and fun to people watch. The dog on the bottom left is the gorgeous Mulligan. Here is another picture of her - because well I just like pictures of her. 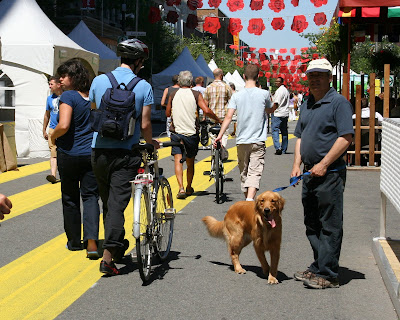 I told you it was hot - look how long a dog's tongue can go.

This one I just didn't understand 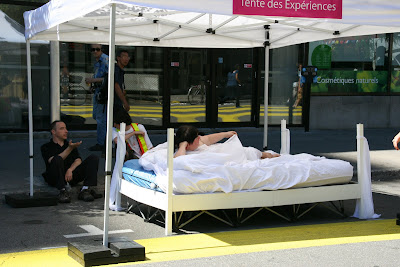