I am having an amazing fall, so good that I am pinching myself.

The  first show I participated in was called`To Mr Cohen with Love, sincerely a Friend` at Viva Vida Art Gallery.  Don't you just love the title.  Is there anyone that doesn't adore Leonard Cohen and considered him a friend, especially in Montreal.

I have mentioned before there are few artists that appeal both to the French and English.  In Montreal he is adored by everyone.  He insisted on being buried in Montreal and any tributes to him would be in Montreal. (it is coming up soon and I don't have tickets).

I submitted 3 paintings to the show and they were bought by the same person.

This picture is awful but it does show the 3 dots. Those spots of red bring joy to my heart. 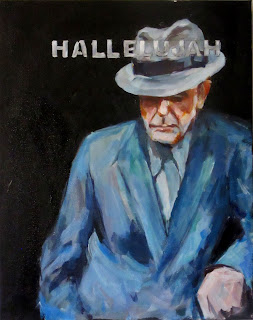 Someone at the show liked Hallelujah and was sorry that it was sold (I wasn't) and commissioned a similar painting.

It was hard to make a similar painting.  Clearly my career as a forger is over.

Even for my own paintings.
Posted by 5minutesfromcool at 17:14