I recently submitted 2 paintings to a juried show and one piece was accepted. This was my first time being judged and my first reaction was great, I was accepted. Of course, my second reaction was what was wrong with the other painting. My third reaction was it can't be much of a show if they are accepted me. I react too much. 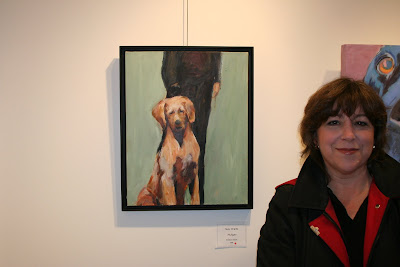 I was thrilled when we arrived at the vernisage and was told that my painting had sold. See you can see the red dot if you squint hard. The other works were impressive. Half the proceeds were going to Animatch which is a dog rescue, an organization I am proud to help.
Elana's pants are in the background. Every painting I have done of her feet has sold. She thinks I make her look fat. She has fat ankle issues.
The only thing was I forgot to take a picture of Mulligan with her portrait. So I returned on Monday. Let me say in advance is that I don't think I thought this out. Mully is the most 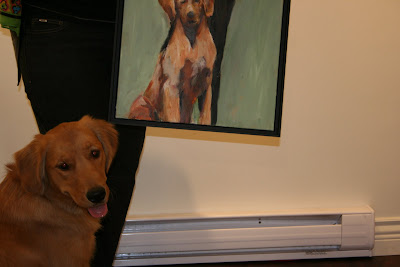 beautiful dog in the world (I know because my husband agrees with me). she is also the worst behaved dog in the world. I am sure there is probably some dog who is worse but that dog doesn't live with us. Well she burst into the gallery and I didn't know that the owner of the gallery brings her own dogs with her. Mully thought she was at a dog park and just started running around and playing.
Galleries shouldn't leave cookies on the tables or candies or wine either.
I finally got her to pose. Lots of cookies were used. Right beside our picture was a glass table with pretzels.
Thank God the table was stronger then it looked.
I don't think we will be invited back to the gallery.
Posted by 5minutesfromcool at 21:45