Louis Cyr was a very, very strong man.  Google him if you don't believe me.  For 2 years as I took the bus to Dawson Cegep (a college in Montreal) to go to the cafeteria, I would pass his statue. I didn't know who he was and not having google and being too lazy  to go to the library to look him up, I never read about him, but I loved this statue.  Who wouldn't - it doesn't look like  the rest of the statues around the city - no angels, no halos, and no horses.  The part of town he is in, is a working class area and he just seems to fit.  There used to be a church across the street but it burnt down and on the other corner is a Home Depot but he remains perpetually strong and silent. Damn I really like this statue. 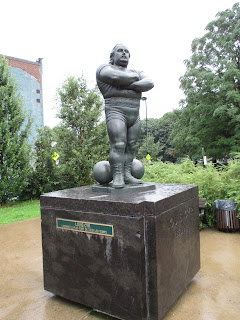 They made a movie about him and it is now playing.  I don't know if I will see it, I prefer my own imagination in this case.  I did paint a version of the statue.  The difficulty of painting a statue is not making it life like - I think I failed but I did have fun and I don't feel like doing anymore. He looks fat and not strong.  Well I can always just go and see him.  Love that statue